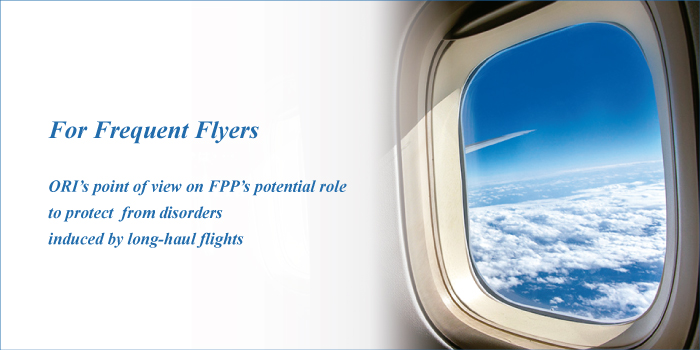 Air travel is the cause of many disorders, especially when flights are long and cross several time zones. These disorders are more severe when going East - as the day is shortened - than flying West when following the sun makes the day longer and thus falling asleep easier.

The disorders caused by air travel are as follows:

These disorders are an issue for frequent flyers, including, among others, pilots, crew members, and business people.

Individuals who travel internationally for business are required to perform immediately upon their arrival, no matter how many time zones they have crossed. As there is often only one chance of success in business, these professionals must be in optimal shape to perform at their best level. It is, therefore, crucial for them to take care of and protect themselves against the disorders provoked by air travel.

What is Jet Lag?

Jet lag is a sleep disorder and an issue for frequent flyers and international travelers. It occurs when the body has to adapt to a new day-night cycle after crossing several time zones. Jet lag is mainly due to a disruption in the production rhythm of hormones such as cortisol and melatonin. As a consequence, the body clock gets thrown off balance, and people feel sleepy when they should be awake, and awake when it is time to sleep.

With jet lag, people feel fatigued, and their alertness is affected. They experience difficulty concentrating, trouble sleeping and narcolepsy, i.e., they can fall asleep at any time during the day. Jet lag can have a detrimental impact on their productivity. Business people certainly cannot use jet lag as an excuse for not being on top of their game to conduct business.

At a cruising altitude of 12,000 meters, the brain of air travelers is subjected to a radiation exposure that is 100-150 times more intense than at sea level. And a single solar flare can expose them to radiation over the annual dose limit! This radiation exposure generates an increased production of free radicals in the body, leading to a harmful phenomenon: oxidative stress.

Free radicals are naturally produced by the body to respond to its specific needs such as energy production and the immune defenses. However, when produced in excess, free radicals generate "oxidative stress." The many causes in our life that can lead to an increase of free radicals are of two kinds: internal and external. The internal source of this increase is the very decline of our anti-oxidative system induced by aging or age-dependent diseases and other chronic conditions. The external sources are related to the exposure to stressors, such as a poor diet, tobacco, the sun, pollution, radiation, and more.
It is crucial to stress that oxidative stress adds up during our life, and that, unfortunately, recognizing its symptoms is difficult as they are not specific: it can be fatigue, difficulty recovering after physical efforts, a decreased alertness, and more. You don't really 'feel' oxidative stress.

Flying and the Immune system

Long-haul flights are also detrimental to the immune system. This system is one of our natural defense systems, and its role is to protect us from diseases and infections.

Air travel affects the mucus which covers our upper respiratory tract and protects us against infections. Mucus is secreted along with other infection-fighting substances that make up our immune system, such as specific antibodies (IgA) and lysozyme, a protein that our body produces.

Air conditioning systems in planes are complicated to manage, and most of the time passengers have to face big variations of temperature. The air in aircraft is often of poor quality. Our upper respiratory tract ends up very dry which induces an important diminution of its mucus. This, in turn, increases the risks of inflammation (rhinitis, sinusitis, and more) and infection (from bacteria, viruses, parasites). Drinking water during a flight is a simple but effective measure to avoid drying the upper respiratory tract.

Flying - Effects on the brain and energy production

Flying can take a toll on travelers' brain and energy production.
The amount of oxygen at a cruising altitude of 12,000 meters is 20 % less than at sea level. This means that air travelers get less oxygen to breathe and a lower amount of oxygen reaches their brain. Also, prolonged sitting in the aircraft creates poor blood circulation. The blood is no longer supplying the body and the brain with enough oxygen and nutrition.

During a long flight, DNA damage due to radiation exposure, lower amounts of oxygen and poor blood circulation deprive the brain of oxygen and nutrient. This decreases the brain energy metabolism triggering a mild inflammation which is detrimental for an optimal brain function. It also increases fatigue.

Using natural food supplements (clinically and scientifically approved) can provide an excellent solution to help us protect ourselves against external stressors promoting oxidative stress, and fight the weakening of our anti-oxidative system.

The properties of FPP can help to fight the disorders caused by long-distance traveling, and thus maintain the brain abilities at the maximum performance level. FPP is a functional food supplement made from the fermentation of non-GMO papayas grown in Hawaii.

The Osato Research Institute has been sponsoring and participating in numerous scientific and clinical studies for 25 years all over the world. We have been working in collaboration with renowned scientists such as 2008 Nobel Prize in Medicine Prof. Luc Montagnier (France), Prof. Lester Packer (San Francisco, USA), Prof. Francesco Marotta (Italy), and Prof. Chandan Sen (Ohio University, USA), among others. (See references of our last published studies at the end of this document.)

These studies have demonstrated the main properties of FPP including:

How to take FPP for frequent flyers

The usual recommendation is three packets for one flight:

However, you can take FPP at any time as it is a food.

Open the packet and put its content under your tongue. Let your saliva and the powder mix before swallowing.

FPP is a 100% natural dietary supplement made by the fermentation of non-genetically modified papayas. It combines two well-known natural keys for good-health in Japan, i.e., papaya and fermentation.

A personal experience with FPP

Mr. Yuki Hayashi, president of Osato Research Institute, makes business trips to the United States and Europe at least once a month.
Before taking FPP, he used to experience the following jet lag symptoms:

These symptoms were caused by many long and frequent flights. Since Mr. Hayashi has been taking FPP each time he has to fly, he noticed a real difference in his condition. He has overcome all seven symptoms. Also, he has gotten rid of his vulnerability to cold.

Why not try FPP for your next flight abroad?

All studies below refer to the generic name of FPP, i.e., FPP

I. The Effect of Fermented Papaya Preparation on Radioactive Exposure.
https://en.ori-japan.com/research/bodyregion/body/the-effect-of-fermented-papaya-preparation-on-radioactive-exposure-2.html
Survival of mice irradiated with 10Gy was determined after 3 weeks. 2Gy is used for lung cancer. 10Gy is 5-time the dose of radiation. While the mice treated by FPP showed 100% survival, the mice that were untreated by FPP showed 0% survival.

II. Oxidative Stress in Patients with Alzheimer's Disease: Effect of Extracts of Fermented Papaya Powder
https://en.ori-japan.com/research/bodyregion/cat12/file-2014-12-26.html
We studied 40 patients, 28 AD patients, and 12 controls. Twenty AD patients were supplemented with FPP, while controls did not receive any treatment. In AD patients FPP decreased about 50% oxidative stress.

III. Assessment of the effect of fermented papaya preparation on oxidative damage
https://en.ori-japan.com/research/bodyregion/cat12/file2009-1.html
We proved using ESR that FPP is blood brain barrier-permeable and modulates oxidative stress in brain.

V. Improved function of diabetic wound-site macrophages and accelerated wound closure in response to oral supplementation of a fermented papaya preparation
https://en.ori-japan.com/research/bodyregion/skin/improved-function-of-diabetic-wound-site-macrophages-and-accelerated-wound-closure-in-response-to-or.html
It is difficult for diabetic patients to improve peripheral blood circulation. FPP was confirmed that it promoted NO production and iNOS gene expression were markedly upregulated in the wounds FPP supplemented db/db mice.

VI. Does Oral Supplementation of a FPP Correct Respiratory Burst Function of Innate Immune Cells in Type 2 Diabetes Mellitus Patients?
https://en.ori-japan.com/research/bodyregion/inflammation/file2015-1.html
Type II diabetes patients are known to be lack of energy metabolism. We confirmed that FPP increased cellar ATP concentrations and improved energy production as well as improved immunity of Type II diabetes patients. There is not much drugs that have this effect.

VII. Follow up of Oxidative Stress of 3 racers (DBR9No. 009) during 24 Hours race
https://en.ori-japan.com/research/bodyregion/body/aston-martin-racing-le-mans-2007-follow-up-of-oxidative-stress-of-3-racers-dbr9n-009-during-24-hours.html
Osato Research Institute has been supporting Aston Martin Racing drivers and mechanics as their official partner with FPP for their health care since 2005. During an endurance race such as Le Mans 24 hours, drivers always receive brain damage due to G-force. They always have to use brain actively to concentrate on driving, so the consume lots of glucose as energy source for brain. Therefore, they would become like jet lag due to inflammation of the brain and lack of energy after 24-hour race. We confirmed that FPP could reduce DNA damage of drive as half as that of non-supplemented driver when we compare them after racing.

Lastly, we would like to introduce 4 clinical study papers on FPP:

A. Is there a potential application of a fermented nutraceutical in acute respiratory illnesses?
https://en.ori-japan.com/research/bodyregion/cat9/file2012-2.html

C. The Antioxidant Effect of Fermented Papaya Preparation in the Oral Cavity.
https://en.ori-japan.com/research/bodyregion/cat10/the-antioxidant-effect-of-fermented-papaya-preparation-in-the-oral-cavity.html