The Antioxidant Effect of Fermented Papaya Preparation in the Oral Cavity.

The Antioxidant Effect of Fermented Papaya Preparation in the Oral Cavity.

Oxidative stress has been recognized to play important roles in various diseases, including of the oral cavity. However, nutritional supplementation of antioxidants to ameliorate the consequences of oxidative stress is debatable. One caveat is that oxidative status is often measured under non-physiological conditions. Here, we investigated the anti-oxidant potential fermented papaya preparation (FPP), a product of yeast fermentation of Carica papaya Linn, under conditions which prevail in the oral cavity. Employing highly sensitive luminol-dependent chemiluminescence assays, we show that its antioxidant capacity was augmented by saliva (up to 20-fold, p<0.0001, at 10mg) and its components (mucin, albumin) as well as by RBC and microorganisms present in the normal and pathological environment of the oral cavity. (Fig.1) Polyphenols are major plant antioxidants.Using the Folin-Ciocalteu's assay, a very low amount of phenols was measured in FPP suspended in a salt solution. However, its suspension in saliva, albumin, mucin or RBC produced up to sixfold increase, p<0.001, compared with t polyphenols assayed separately. (Fig.2) The results suggested that these enhancing effects were due to solubilisation of anti-oxidant polyphenols in the FPP by saliva proteins and their binding to RBC and microorganisms, thus increasing their availability and activity. 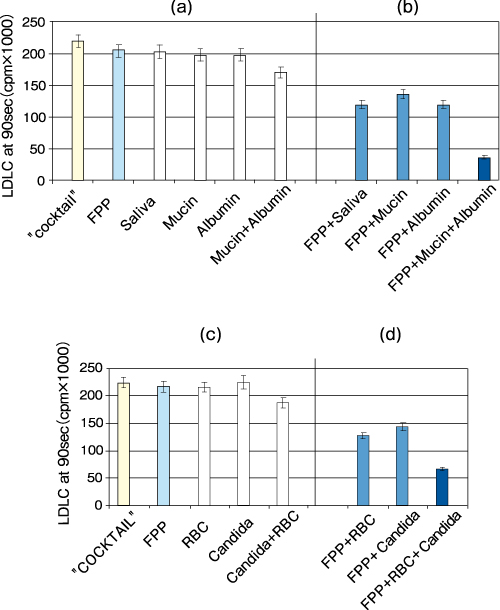 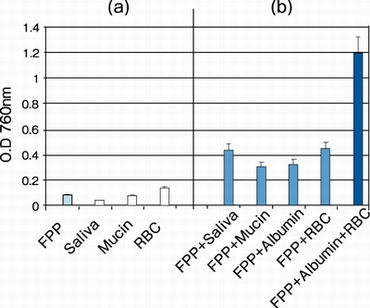 Fig.2：The phenol content of FPP in the presence of saliva, mucin, albumin and RBC, separately (a) and in combinations (b), were measured by the Folin-Ciocalteu's assay.