Is there a potential application of a fermented nutraceutical in acute respiratory illnesses? An in-vivo placebo-controlled, cross-over clinical study in different age groups of healthy subjects.

Clinical evidence and cellular models have shown an inverse relationship between the intakes of plant and fruit based diets and oxidative stress, suggesting the suitability of natural antioxidants in the management of diabetes mellitus and its complications. A randomized controlled clinical trial was conducted at the Cardiac Centre, SSRN Hospital, Pamplemousses, (Mauritius) to determine the effect of a short term supplementation of a fermented papaya preparation (FPPR) on biomarkers of diabetes and antioxidant status in a multi-ethnical neo-diabetic population from November 2010 to March 2011. Supplementation of 6 g FPPR/day for a period of 14 weeks could improve the general health status of several organs targeted by oxidative stress during diabetes. When comparing experimental to control groups with independent samples t-test, C-reactive protein levels significantly decreased (P=0.018), LDL/HDL ratio was considerably changed (P=0.042), and uric acid levels were significantly improved (P=0.001). ANOVA results also validated the same findings with significant differences in C-reactive protein, LDL/HDL ratio, uric acid and in serum ferritin levels. FPPR may present a novel, economically feasible nutraceutical supplement for themanagement of diabetes and for those at risk for cardiovascular disease, neurological disease and other conditions worsened by overt inflammation and oxidative stress.

The role of oxidants in viral diseases is fairly complex because it includes metabolic regulation both of host metabolism and viral replication. However, a role for reactive oxygen species (ROS) and reactive nitrogen species (RNS) as mediators of virus-induced lung damage is supported by studies and antioxidants can thus be expected to act at many different levels. The aim of the present pilot study was to test an antioxidant nutraceutical approach on some relevant immunological parameters known to be affected in common seasonal respiratory tract infection. The study population consisted of 90 sedentary healthy patients, previously selected as being GSTM1-positive, divided into three groups: A) 20-40 years; B) 41-65 years; B) over 65 years. Each patients was administered a life style and dietary questionnaire. Subjects were supplemented for 1 month with either 9g/day (4.5g twice a day sublingually) of a fermented papaya preparation (Osato Research Institute, Gifu, Japan) or placebo. After a further month period of wash out, subjects were treated again in a crossover manner. Parameters checked were as follows: routine blood tests with WBC formula, saliva flow rate and secretary IgA and lysozyme production and redox gene expression of Phase II enzyme and SOD from upper airways cells (from nasal lavage). Salivary secretion rate showed an age-related decline and was significantly increased by FPP supplementation only in the youngest age-group (p<0.05). 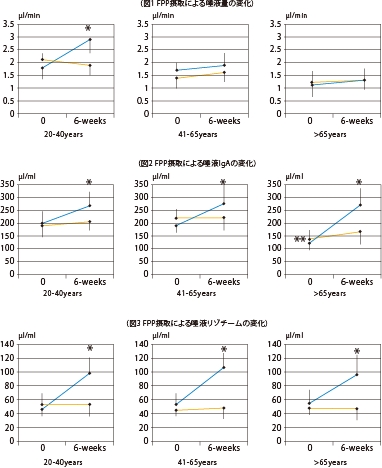 Subjects treated with FPP showed a significantly higher lever of IgA and lisozyme production., irrespective of age group while their baseline production was significantly lower in the oldest age-group as compared to the youngest one (C vs A, p<0.05). FPP treatment brought about a significant upregulatiion of all phase II enzyme and SOD gene expression tested in nasal lavage cells. In conclusion, FPP supplementation during 1 month resulted in higher salivary IgA and increase in phase II and SOD enzyme expression, i.e the most important antioxidant in the respiratory tract.

The biological significance of these effects i.e., whether it will help reducing the whole respiratory oxidative stress in the human airway and, hopefully, the incidence and/or severity of URTI remains to be demonstrated in longer clinical trials.