Cardioprotective Effect of a Biofermented Nutraceutical on Endothelial Function in Healthy Middle-Aged Subjects.

The vascular endothelium is an active and relevant tissue which controls several important functions, including the regulation of vascular tone and maintenance of blood circulation, fluidity, coagulation and inflammatory responses. Endothelial function is influenced by numerous cardiovascular risk factors and is impaired in smokers although being otherwise healthy. Moreover, endothelial dysfunction is independently related to future cardiovascular events and the prognosis of cardiovascular diseases.

NO is a fundamental endothelium-derived molecule and impaired endothelium dependent vasodilatation mediated by NO is a hallmark of endothelial dysfunction. Since, the availability of reactive oxygen species allows direct generation of cytotoxic radicals and NO inactivation, it has been shown that ADMA, an endogenous competitive inhibitor of NO synthase, is produced by methylation of arginine residues in intracellular proteins via arginine Nmethyltransferase and causes endothelial dysfunction and atherosclerosis. Thus, this study was aimed to test whether FPP (Osato Research Institute, Gifu, Japan), which has been previously shown to positively modulate NO could positively affect the above parameters in a healthy subject cohort.


All 42 participants were healthy middle-age subjects (42-57y old, male/female: 27/15) and not taking any drugs or supplements. Subjects will be given FPP 3g three times a day for 6 weeks and tests were repeated at 3 and 6 weeks. Placebo group was given same quantity of flavored sugar. 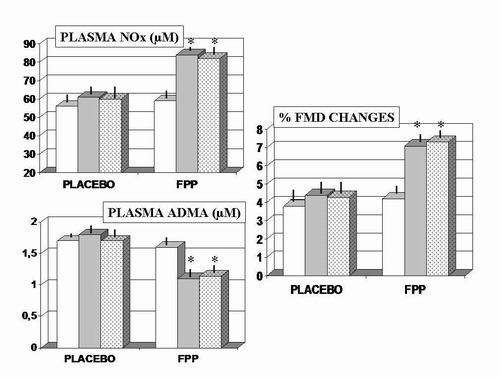 In result, Either MDA, soluble CD40 ligand and hCRP were within normal limits in all subjects and were not changed by FPP consumption (data not shown). In the interventional group overall FMD significantly increased from 4.2% to 7.3% (p<0.05 vs placebo). Few subjects had abnormal levels of 4HNE at baseline (outside the reference range given by the manufacturer) (3 in placebo group and 5 in FPP group) which didn't change the overall significance. However, only those subjects in FPP group normalized this value. A significant increase in plasma nitric oxide and a decrease in ADMA levels were detected after consumption of FPP (p<0.01).

Although our data cannot be directly translated into an integrative therapeutic approach in cardiovascular patients, they may be worth consideration in view of a wider healthy aging perspective.