The Effect of Fermented Papaya Preparation on Radioactive Exposure.

The Effect of Fermented Papaya Preparation on Radioactive Exposure.

Exposure to ionizing radiation causes cellular damage, which can lead to premature cell death or accumulation of somatic mutations, resulting in malignancy. The damage is mediated in part by free radicals, particularly reactive oxygen species. Fermented papaya preparation (FPP), a product of yeast fermentation of Carica papaya Linn, has been shown to act as an antioxidant. In this study, we investigated the potential of FPP to prevent radiation-induced damage. FPP (0-100 μg/ml) was added to cultured human foreskin fibroblasts and myeloid leukemia (HL-60) cells either before or after irradiation (0-18Gy). After 1-3 days, the cells were assayed for: intracellular labile iron, measured by staining with calcein; reactive oxygen species generation, measured with dichlorofluorescein diacetate; apoptosis, determined by phosphatidylserine exposure; membrane damage, determined by propidium iodide uptake; and cell survival, determined by a cell proliferation assay. DNA damage was estimated by measuring 8-oxoguanine, a parameter of DNA oxidation, using a fluorescent-specific probe and by the comet assay. These parameters were also assayed in bone marrow cells of mice treated with FPP (by adding it to the drinking water) either before or after irradiation. Somatic mutation accumulation was determined in their peripheral red blood cells, and their survival was monitored. FPP significantly reduced the measured radiation-induced cytotoxic parameters. This finding suggests that FPP might serve as a radio protector, and its effect on DNA damage and mutagenicity might reduce the long-term effects of radiation, such as primary and secondary malignancy. 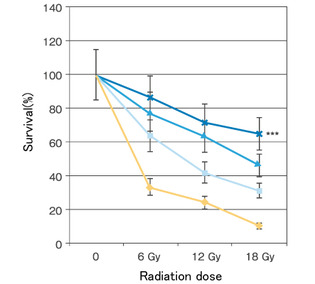 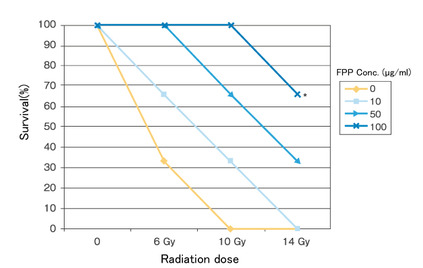