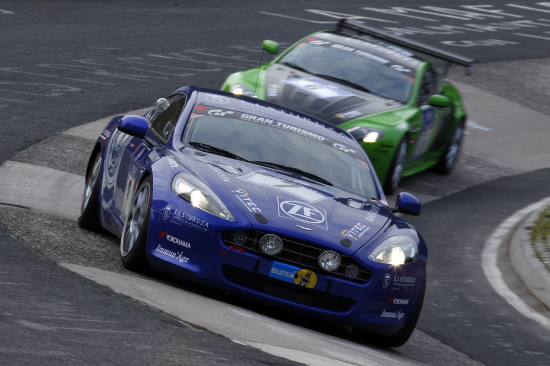 Just as the coming of spring in Japan was two weeks late this year, it was still quite cold in Europe. The temperature in Nürburgring was only 3 degrees Celsius in the morning.
Because of the changeable weather with watery sky on the day before the race, the tires did not get warmed up enough and all the teams had a difficult time.
One of the Aston Martin's dual entries in SP8 Class was new four-door Rapide, which was released in May simultaneously all over the world. Aston Martin's CEO, Dr Ulrich Bez participated as one of the drivers. The other was V12 Vantage, the winner of last year. The race started at 15.00 CET on 15 May 2010, which was a brilliantly sunny day.

Until the last six hours of the race, V12 Vantage and Rapide remained in 1st and 3rd place in class, but suddenly V12 Vantage stopped in the middle of the circuit due to fuel pump issues.
Head of Motorsport, David King rushed to the Aston Martin DBS by driving the Cygnet and took the wheel of the DBS to get the V12 Vantage towed back to the pit. It was the moment when the DBS became the most expensive tow car in the world.

The 24-hour Nürburgring race came to end at 15.00 CET on 16 May 2010 with the victory of Lexus LFA under the prodding of Toyota Mortor's CEO, Mr. Akio Toyoda. Rapid and V12 Vantage took 2nd and 3rd place in class respectively.

Anyway, the silhouette of Rapide was so beautiful on the circuit. 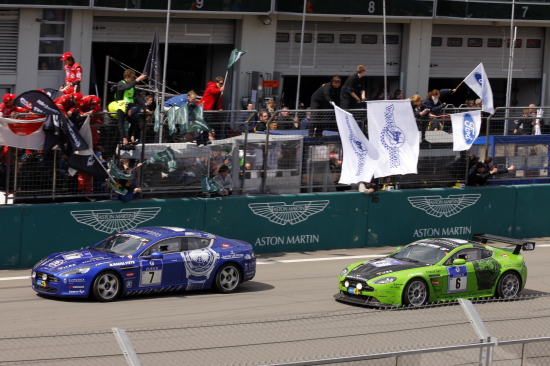