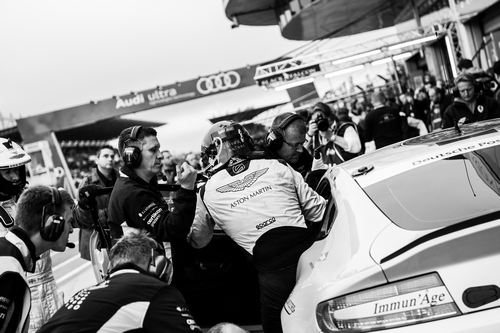 The Nürburgring 24-hour endurance race usually begins on Saturday and ends on Sunday. But this year it coincided with a national holiday in Germany, so the race started at 5:00 pm on Sunday and finished at 5:00 pm on Monday. When we arrived at the Frankfurt International Airport on May 16, Thursday, the temperature was only 5 to 8 degree C and it looked like it was going to rain at any moment. The weather made me worry about the race.

This year is the 100th Anniversary of Aston Martin, therefore they had many program of events planned for celebrating the centenary. On May 19, Sunday, more than 100 Aston Martin sports cars took to the beautiful road circuit of Nürburgring for a celebratory parade rap prior to the race. It was led by Daniel Craig, known for playing James Bond 007, at the wheel of Aston Martin DB5 as well as the CC100 Speedster Concept and DBR1.

On Saturday, in fair weather, Aston Martin qualified in second place for N24 in its V12 Vantage GT3 and surprised rival marques such as Porsche, Audi and Mercedes.

The Hybrid Hydrogen Rapide S, with both of a hydrogen fuel rail and gasoline tank, has a Hybrid Hydrogen twin-turbocharged 6.0-liter V12 engine capable of running using either gasoline, hydrogen or a combination of both. It was a point if it would become the first hydrogen-powered race car to compete and undertake zero CO2 emissions laps in an international race event of FIA.

It produces 560PS with gasoline、and a little less than 500PS with hydrogen, but it is very powerful with the maximum torque of 800 Nm with gasoline.

This engine was developed out of a collaborative project between Aston Martion and Austrian hydrogen power specialist Alset Global. It uses hydrogen for the 1.5 raps of 25km course of Nürburgring and automatically switches to use gasoline for 5 to 6 raps. The safety system was well-made and the engine was reliable.

V12 Vantage with a new engine was fantastic car ever. In the qualification, it was too fast and even recorded the longest distance jump at up and down of the course.

It could have won in SP8 class considering its speed but unfortunately had to take time to fix the electrical wiring connector in the mission which came off during the race.
V8 Vantage was the most reliable car and we could watch the race without any worries. 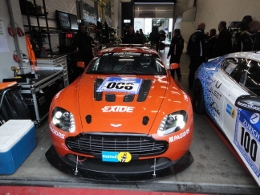 The race started at 5:00 PM on May 19. The start was OK but it started raining around 11:00PM and the circuit was wrapped in a dense fog. The race was red flagged and stopped until 7:00AM.

The race was re-started, but it did not stop raining. The temperature was 6 degree C during the day and Aston Martin GT3 had difficulty with rain tyres and ended in 10th position overall.

In its centenary year, the eyes of all the staff of Aston Martin were sparkling with the excitement of challenge for the new technologies as well as the announcement of a new model.

We can not take our eyes off Aston Martin this year.