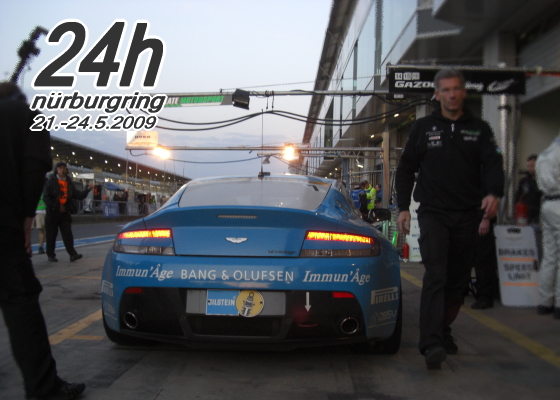 In Europe, spring is the season for the glorious Chelsea Flower show in London, as well as for 'the Quiet Duel' of car racers in the woods of the mid-western German town, Nürburg. From 21st to 24th of May, the 37th "Nürburgring 24 Hour Race" was held at a driving track 25.378 km around, demanding corners and up-down. Because of its toughness, getting a good rap time at this course is the focus of world attention to be important for leading automakers to test and showcase the performance of their flagship cars.

Aston Martin entered two factory cars on the market; they were slightly modified for competition, a new model standing for 'V12 Vantage', together with 'N24V8 Vantage', winning the championship last year. The CEO, Dr Ulrich Bez took part in driving both cars, which was supposed to be served as a test driving of the stock cars, and the V12 Vantage saw a stunning victory in the SP8 class without any major problem during the 24 hours.

On the other hand, the N24V8 Vantage had a rear left tire burst in the center of the track around 5:00 a.m. Amid the rising tension in the pit, a Japanese driver, Shin-ichi Katsura got it back to the pit on his level judgment without giving much damage to the car, which led to the remarkable success of a second place in the SP10 class.
The race started at 4:00 p.m. on Saturday, 22nd of May, and ended at 4:00 p.m. on Sunday, 23rd of May. From the beginning to the end of the race, all the drivers and pit crews, as well as the cars, showed professionalism calmly as a team, each committed to their missions assigned individually. The 24 hour experience in the German track impressed me with excellence of 'humans and cars combined' against this digital society making anything look easy to obtain results. I felt proud of "Immun'Age", which has been loved by such professionals of Aston Martin.