～Good news for those who want Healthy Aging！～FPP(Fermented Papaya Preparation) has beenpatented as "ATP Production Promoter, Mitochondrial Activity Promoter, and Immunostimulant" in JAPAN

The favor of having three health benefits in one food as an ATP production promoter, a mitochondrial activity promoter, and an immunostimulant is rare in the world, and it may be hopefully expected to reduce a risk of various diseases including dementia as well as financial burden on healthcare as its result. 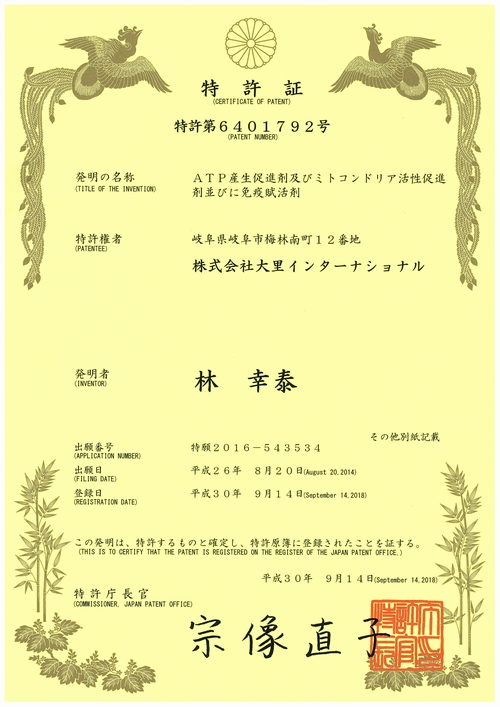 These patented functionalities of FPP have been proved by the clinical paper* titled with "Does oral supplementation of a fermented papaya preparation correct respiratory burst function of innate immune cells in type 2 diabetes mellitus patients?" published in Antioxidants & Redox Signaling in 2015 by the Prof. Chandan K. Sen's team, who is a co-inventor of the relevant patent. In consequence of the above clinical study, it was confirmed for the first time in the world that FPP improves the immune system of diabetic patients. They also confirmed that FPP increases energy inside the cell, resulting from stimulation of mitochondrial respiration, together with promotion of cellular ATP generation, which are linked with an important effect of FPP's immunostimulant mechanism.

FPP is a fermented food made by natural papayas of nature's blessing, fermented for one year and processed into powder form. Fermentation helps with absorption of nutrients, being a key of FPP's functions.
Since FPP is not only safe for diabetic patients but it is also shown the possibility that it helps a lot to enhances the immunity of the diabetics, there has been an increasing interest in FPP among medical experts. Mitochondria is a subcellular organelle, which operates like an energy factory, producing 95% of the energy required for vital activities (ATP).
FPP has been tested that it promotes ATP generation and mitochondrial activities, thereby hopefully contributing to reduction of risks of various diseases, such as dementia, caused by functional declines with aging.

Osato Research Institute (ORI) has been conducting researches on FPP on the theme of "Healthy Aging", aiming at reduction of medical costs though preventive medicine. ORI intends to take the opportunity of this patent registration in Japan of FPP in order to focus more on preventive medicine and pursue further research and social activities for prevention of dementia, aimed at achieving to reduce medical costs.