ORI has been an official partner of BRDC since 2016, supporting them as "YOUNG DRIVER PATRONS". 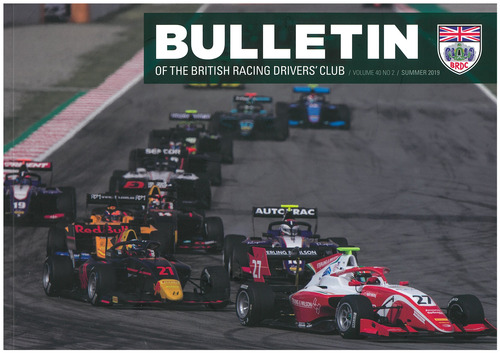 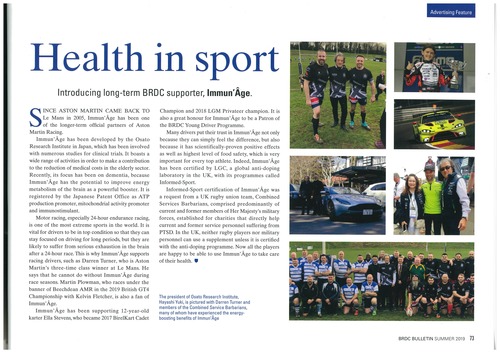 In the article, it is introduced that FPP is patented as"ATP production promoter, mitochondrial activity promoter, and immunostimulant" by Japanese Patent Office; ORI has been supporting motor racing drivers as an official partner of Aston Martin Racing as well as young driver's patron of BRDC; and FPP (Immun'Âge) has been certified with International Anti-Doping program of LGC Ltd upon request of a UK Rugby team "Combined Services Barbarians" consisting of the British Armed Force, etc.

The original is as follows.

SINCE ASTON MARTIN CAME BACK TO Le Mans in 2005, Immun 'Age has been one of the longer-term official partners of Aston Martin Racing.

Immun'Age has been developed by the Osato Resea rch Institute in Japan, which has been involved with numerous studies for clinical trials. It boasts a wide range of activities in order to make a contribution to the reduction of medical costs in the elderly sector.

Recently, its focus has been on dementia, because Immun' Age has the potential to improve energy metabolism of the brain as a powerful booster. Itis registered by the Japanese Patent Office as ATP production promoter, mitochondrial activity promoter and immunostimulant.

Motor racing, especially 24-hour endurance racing, is one of the most extreme sports in the world . Itis vital for drivers to be in top condition so that they can stay focused on driving for long periods, but they are likely to suffer from serious exhaustion in the brain after a 24-hour race. This is why Immun' Age supports racing drivers, such as Darren Turner, who is Aston Martin's three-time class winner at Le Mans. He says that he cannot do without Immun' Age during race seasons . Martin Plowman, who races under the banner of Beechdean AMR in the 2019 British GT4 Championship with Kelvin Fletcher, is also a fan of Immun'Age.

Immun' Age has been supporting 12-year-old karter Ella Stevens, who became 2017 BirelKart Cadet Champion and 2018 LGM Privateer champion. It is also a great honour for Immun' Age to be a Patron of the BRDC Young Driver Programme. Many drivers put their trust in Immun 'Age not only because they can simply feel the difference, but also because it has scientifically-proven positive effects as well as highest level of food safety, which is very important for every top athlete. Indeed, Immun'Age has been certified by LGC, a global anti-doping laboratory in the UK, with its programmes called Informed-Sport.

Informed -Sport certification of Immun 'Age was a request from a UK rugby union team, Combined Services Barbarians, comprised predominantly of current and former members of Her Majesty's military forces, established for charities that directly help current and former service personnel suffering from PTSD. In the UK, neither rugby players nor military personnel can use a supplement unless it is certified with the anti-doping programme . Now all the players are happy to be able to use Immun' Age to take care of their health.