The interview with Ski Cross Skier, Akane Atomura, at Shiga-Kogen was broadcast.

Osato Research Institute supports Ski cross skier, Akane Atomura. She received an interview by Shinetsu broadcast at Shiga-Kogen and it was broadcast on April 3, 2016.

The following is the report on the day of the interview held on March 18. 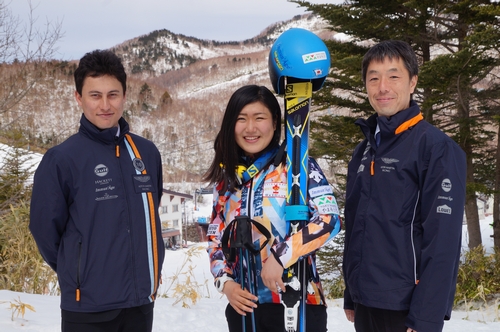 They first filmed her ski practice and interviewed with her for about 30 minutes. She talked about her thoughts for her parents, her jobs, and ski cross races. After the interview, they filmed her working in the restaurant "Canadian House" in Hotel Ichinose. The interview was finished in such a friendly atmosphere.

The interview was finished in the morning, so we could have a chance to ask about FPP she takes after lunch. Ski cross events are held in the mountains at an altitude above 2000 meters overseas. So it is quite normal for her to feel bad, short of breath, or tired (of course suffering from jet lag), when she arrives at the event place. However, she got really surprised that such bad feelings ceased in 5-10 minutes after she took FPP. She also said that by taking FPP after a race or practice, she feels ease even just after skiing without feeling lactic acid in her muscle as always. She takes FPP daily and does not feel any change in particular with normal condition, but it was really surprising for her to feel difference clearly after race or practice. She said that she was getting strong mentally, but she still feels tense during races, so she wants to find good timing to take FPP to gain maximum concentration. "I would like to transmit charm of ski cross as much as possible." said Akane. It was a meaningful dialogue for us. We would like to continue to support her in corporation with Hotel Ichinose.