In the medical journal "BIO Clinica Vol.35 No.4 APR. 2020 - Progress of treatment and research on dementia", appeared a research report written by Dr. Shoko Okuda, the Osato Research Institute vice president, and Makiko Osato, the ORI researcher, entitled "Ameliorating Effect of FPP (Fermented Papaya Preparation) on oxidative stress in Alzheimer's Disease Patients: Possibility of FPP as a medical food for prevention of dementia"

"BIO Clinica" is a medical journal, of which chief editors are Prof. Tasuko Honjo of Kyoto University, Nobel laureate in Physiology or Medicine, and Prof. Kiyoshi Kurokawa of National Graduate Institute for Policy Studies. We had been requested to write a research report on FPP's control of the Growth of a Murine Melanoma in the journal "MSD (Medical Science Digest)" before, which brought us an opportunity to be requested to write a report again for the sister magazine. 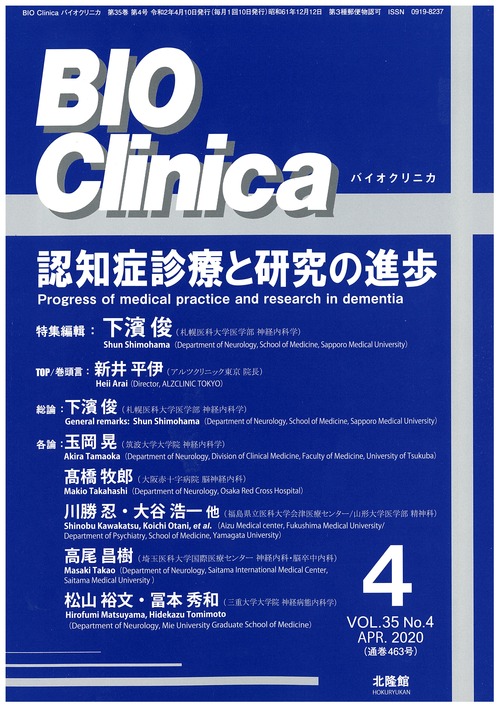 Title of the research report

"Ameliorating Effect of FPP (Fermented Papaya Preparation) on oxidative stress in Alzheimer's Disease Patients: Possibility of FPP as a medical food for prevention of dementia"

The summary of the report is as follows:

Owing to the series of Diabetic studies, it has been recognized that FPP improves energy metabolism of diabetic patients with decreased immunity and enhance their immune system by activating respiratory burst, which is a part of immune response, and as the result, it was patented by Japanes patent office as Patent No. 6401792 "ATP Production Promoter, Mitochondrial Activity Promoter, and Immunostimulant" in September 2018.

Furthermore, Prof. Lee at Kanagawa Dental University conducted a clinical research on FPP to evaluate oxidative stress in the SHR brain in 2009. Supplementation (5-7 months) with FPP (50mg/rat/day) significantly increased the decay of the ESR images of the MCPROXYL, suggesting that FPP may have up-regulated the redox defense activity in the SHR brain.

Considering a series of FPP researches showing the improvement of energy metabolism of diabetic patients, as well as the regulation of oxidative stress by FPP without being limited by Blood Brain Barrier, the Osato Research Institute has been conducting a clinical research at Florida University Center for Cognitive Aging & Memory to evaluate FPP's potential to help energy production in the brain of dementia patients as well as elderly people with low energy metabolism.

The FPP researches on Type II diabetics has been proving the possibility of FPP to be useful for the treatments to prevent and delay dementia and further studies are expected.

Published in "Mediators of Inflammation"

Click here to read the article about the published paper.