In the following article, you can read how the documentary video was shot.

In the World Expo 2015, which will take place from May to October 2015 in Milan in Italy, the international will be held with theme of Anti-aging and Prevention of diseases.

In this congress, studies on FPP will be presented and the Osato Research Institute, which studies on FPP aiming reduction of medical costs by Preventive Medicine in the aging society, received film crew coverage to make a documentary video. 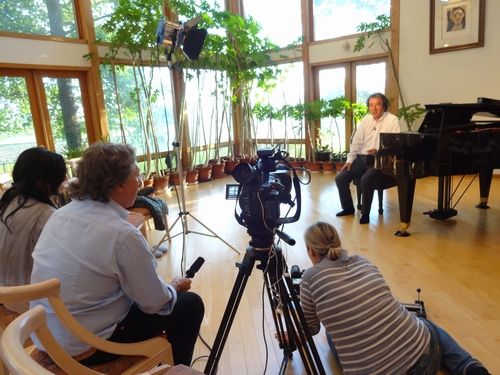 For this coverage, famous Italian journalists and cameraman visit Japan from 5th to 14th October 2014 and reported extensively on Japan and FPP.

The documentary video seems to become very interesting in terms of contents, since it doesn't only introduce FPP and its philosophy behind through the interviews with Mr. Yuki Hayashi, President of O.R.I., and Dr. Pierre Mantello, Director of O.R.I., but also cuts deeply into traditional and cultural background of FPP being born in Gifu, Japan.

The Tourism Division of Gifu Prefecture Office also supported the crew a lot, considering this can be a very good opportunity to transmit information from Gifu to the world. They visited many place in Gifu, such as Nagara River to watch traditional Cormorant Fishing, Hida-Takayama, World Heritage at Shirakawa-go and Gero etc. They also visited Zuiryo-ji Temple and Inaba Shrine in Gifu-city to introduce Zen and Shintoism, both of which deeply influence Japanese way of thinking, and received a warm welcome there.

During their visit to Japan, Aston Martin Racing, which Osato Research Institute has been supporting as technical partner, participated in the FIA World Endurance Championship (WEC) Six Hours of FUJI taken place at Fuji Speedway near Mt. Fuji, so they visited to film the race and the World Heritage of Mt. Fuji.

This documentary video will be introduced during the conference as well as in the World Expo.
We hope it could be a good opportunity of public relation activity to introduce Japanese culture and Gifu prefecture.