In recent years a number of studies have reported the significant relationship between metabolic syndrome and neurodegenerative disease. There is accumulating evidence that the interplay of combined genetic and environmental risk factors (from diet to life style to pollutants) to intrinsic age-related oxi-inflammatory changes may be advocated for to explain the pandemic of neurodegenerative diseases. In recent years a specific Fermented Papaya Preparation (FPP) has been shown to significantly affect a number of redox signalling abnormalities in a variety of chronic diseases and as well in aging mechanisms either on experimental and on clinical ground. The aim of the present study was to evaluate FPP use in impending metabolic disease patients with potentially neurodegenerative disease clustered risk factors. The study population consisted of 90 patients aged 45-65 years old, with impending metabolic syndrome and previously selected as to be ApoE4 genotype negative. By applying a RCT, double-blind method, one group received FPP 4.5 g twice a day (the most common dosage utilized in prior clinical studies) while the other received an oral antioxidant cocktail (trans-resveratrol, selenium, vitamin E, vitamin C). Then, after 21 month treatment period, a selected heavy metal chelator was added at the dosage of 3 g/nocte for the final 3 months study treatment. The parameters tested were: routine tests oxidized LDL-cholesterol, anti-oxidised LDL, Cyclophilin-A (CyPA), plasminogen activator inhibitor-1 and CyPA gene expression. From this study it would appear that FPP, unlike the control antioxidant, significantly decreased oxidized-LDL and near normalizing the anti-Ox-LDL/Ox-LDL ratio (p<0.001) although unaffecting the lipid profile per sè. Moreover, only FPP decreased cyclophilin-A plasma level and plasminogen activator-inhibitor (p<0.01) together with downregulating cyclophilin-A gene expression (p<0.01). Insulin resistance was only mildly improved. Heavy metals gut clearance proved to be effectively enhanced by the chelator (p<0.01) and this was not affected by any of the nutraceuticals, nor it added any further benefit to the biological action of FPP.
These results suggest that FPP might play a noteworthy role to prevent impending metabolic diseases which are potential co-factors of neurodegenerative disease.

Fig.1 Variation of plasma level of oxidised-LDL during treatment with the two nutraceuticals formulas 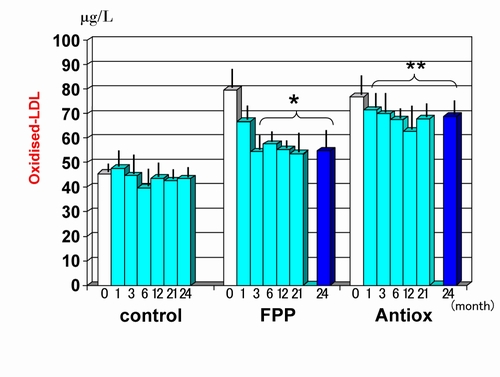 Fig.2 Variation of plasma level of Cyclophilin-A during treatment
with the two nutraceuticals formulas. 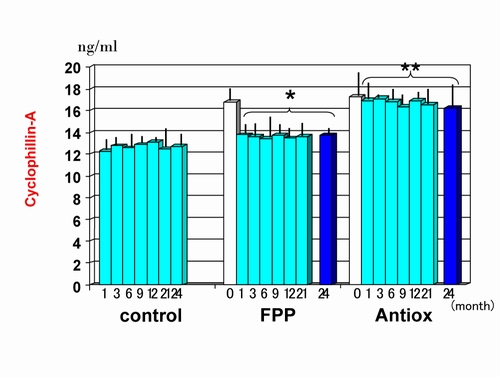