On February 7, 2018, ORI president Mr. Yuki Hayashi was invited as a lecturer of "Class for learning a way of life" at Ono-Kita primary school and gave a presentation under the title of "Education is the Best Prevention" in front of approximately 120 pupils of grade 4 to 6. 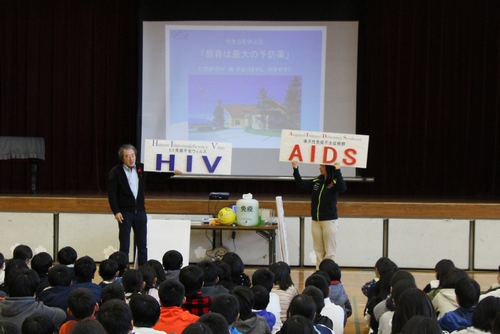 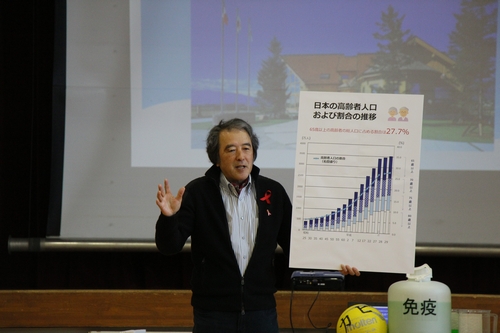 Osato Research Institute and Ono-Kita Primary School are within walking distance in the same district, and we have been engaged in their learning activities, such as class for fire fly conservation project and "Antarctic Class" as a part of social activities.

At the beginning of the class, Mr. Hayashi introduced his presentation at the medical conference in Vatican last year as a part of ORI's activities based on our quest for a way to prevent diseases. Then, he explained about current situation and the growth of medical costs in Japan's super-aged society and talked about what he thinks are the solutions based on the idea of "Prevention is better than cure" and 3 important points for disease prevention: "Education as a preventive medicine", "The way you eat" and "Happy working environment for retired senior generation"

Regarding the preventive education, he talked about AIDS and explained that AIDS is caused by infection with a virus called HIV but following initial infection, a person may not notice any symptoms for a long time and develop opportunistic infections usually after 10 years. By using tools and panels, Mr. Hayashi explained the current situation of AIDS/HIV in the world as well as in Gifu, and that HIV-positive people have to take medicine every single day not to develop AIDS, and there are only 3 route of infection for this virus. Learning about a disease, and knowing how to prevent it would lead to protecting oneself and reduction of medical costs in the end.

Moreover, He also mentioned "ORI wine project" for the purpose of making a social place for local elderly people by converting idled lands into vine yards.

After the lecture, children made a lot of questions. We hope that they learned the importance of disease prevention and diversity of ideas. We received their letters later.

Gifu-chan TV crew came to see this lecture and it was aired on TV news called "STATION!" on February 8, 2018. It was also featured on Gifu-newspaper on February 4.

We would like to introduce some of the questions:

Q. Where is the region most affected by HIV/AIDS in the world?
A. Africa. The reason may be poor educational and financial situation. HIV has been 30 years since HIV was found, but its pandemic hasn't decreased. Recently, the Asian region such as China and South-East Asia are affected by HIV more and more, so Japan has also more risks of infection.

Q. How do you know if you are infected with HIV?
A. You can get tested at a public health center to know if you have HIV. You don't have to say your name at the test.

We would like to introduce letters from the pupils:

"After listening to the lecture of Mr. Hayashi, I thought that the virus of AIDS is considerably less infectious, but there are risks and danger. I would like to prevent it securely not to get infected."

"I learned today that there are 3 patters of HIV infections and if we get infected, we will gradually lose immunity, which is power to heal a wound or cure a disease, such as cold or flu. So I would like to do what I can do for prevention, especially by talking about this disease with people around me. Also, if I meet someone with HIV, I don't want to discriminate them. We should be friends."

"I thought it is important to protect myself from whatever it is. And, I would like to continue to study more to increase my capacity to help others like Mr. Hayashi."