On May 22, 2018, we held an "Antarctic Class" for 39 sixth grader of Ono-Kita elementary school at the Osato Research Institute (ORI). We invited Mr. Taichi Ito, a member of Japanese Antarctic Research Expedition (JARE), as a special lecturer for this class, so that the elementary school kids could talk directly with him about his experience in the Antarctica. 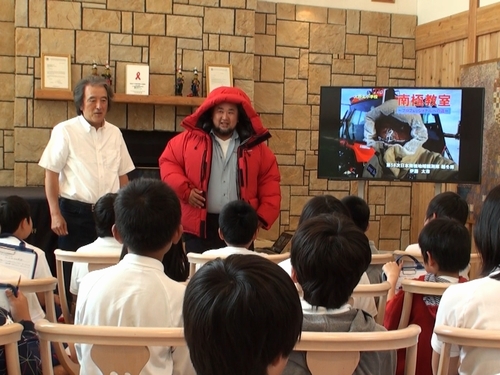 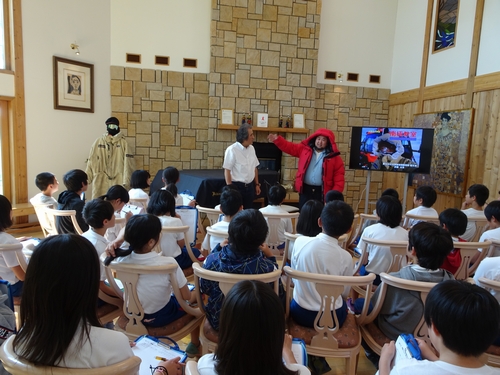 Actually, these kids participated in the 1st "Antarctic Class" held at ORI in September last year. At that time, they were fifth grader and communicated with Mr. Ito and other members of JARE at the SHOWA station over internet connection. Mr. Ito has been selected a member of JARE since his first Antarctic trip in the 55th Antarctic expedition. He joined a winter mission for the first time in this 58th expedition and just came back to Japan in March.

The ORI president, Mr. Hayashi called out "Mr. Ito, please come in". Then Mr. Ito appeared in front of the kids in the jacket that he was wearing in his mission in the Antarctica.

At the beginning, Mr. Ito explained that he was working as an expert of the maintenance of snow vehicles, which transport all the researchers and their observation equipment on snow safely. Then, he talked about his experience that he went to the Dome Fuji Station right after the 1st "Antarctic Class. It is about 1000km away from the Showa station with an altitude of 3,810 m. Owing to the high elevation, the air is very thin and the amount of oxygen is only half of that at ground level. We were so surprised to hear about such a severe environment with temperature of -40℃ even in summer that no animal or bacteria can survive.

Then Mr. Ito showed us some videos of beautiful aurora, cute Adelie penguins, or some funny photos such as frozen cup noodles. Kids could enjoy learning about the Antarctica through answering some quizzes.
At the end, Mr. Ito confessed that he was never good at studying at school. However, he could achieve his dream to go to the Antarctica and explained why he could. He said that firstly he made a lot of friends, secondly he could do a job that he liked, and thirdly he made efforts to be the top of the profession. He encouraged children to maintain smile and a feeling of gratitude toward people they meet and to become a professional in whatever field they would choose.

Q. Do you suffer from jet lag right after you come back from the Antarctica?
A. There is 6-hour time difference, but we come back to Japan via ship, which takes time. So we don't usually have problems of jet lag.

Q. How did you start your job?
A. I did enjoy skiing, which led me to the job of snow vehicle.

Q. Is there anything you miss in the Antarctica?
A. In Japan, there are plenty of things. But I miss the winter life in the Antarctica with other 33 members, since they were like my family. We did not have many things there, but we had each other!
-------------------------------------------
At the end of the class, Mr. Ito showed us that he was pouring water on the ice the Antarctica and let them hear loud cracking sound from the ice, because it contained Antarctic air inside. Some enjoyed touching the ice, and some tried wearing the snowsuit as well. Thanks to Mr. Ito, we could have such a precious time to listen to interesting story directly from him.

This "Antarctic Class" was on air in the TV program called "STATION!" of GIFU broadcast on May 22, and featured in Chunichi newspaper on May 23, on Gifu-newspaper on May 24. It was also introduced in Facebook of Ono-town.