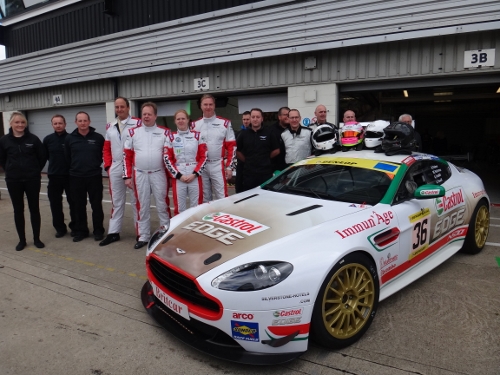 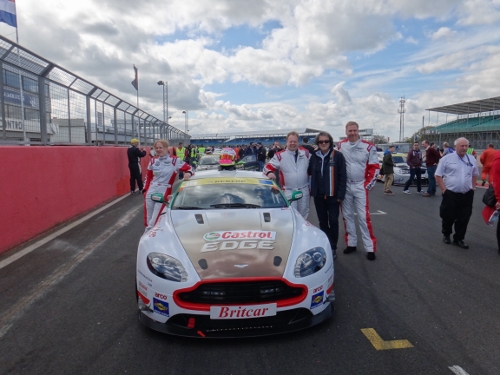 About one hour before the start of the race,
the atmosphere getting a little more tense. 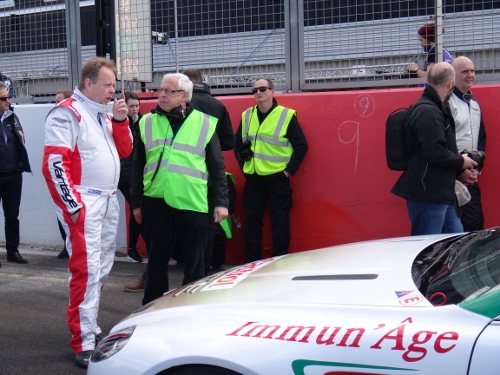 Andy looks like having a private meeting with the director, doesn't he?

Aston Martin, with its over 100-year-old history, has been involved with racing and the previous CEOs, have driven racecars in the 24-hour endurance races to demonstrate the performance and durability of their cars. Dr. Andy Palmer, who has been Aston CEO since October 2014, made his first attempt of 24-hour race with V8 Vantage GT4 with three teammates: Aston Martin Design Director Marek Reichman, British Motoring Journalist Andrew Frankel and the only girl in the team, as a professional female racer, Alice Powell. The drivers were all British.

On April 25, the race started at 4:00 PM. Alice drove the first stint and kept her position within 10th place and was followed by Andrew, Marek and Andy. All of them, except Alice, had never experienced a night wet circuit before, but they all dealt with their tasks very well. At four hours before the end of the race, the team director Graham decided to let Alice drive a double stint and she caught up to the 5th place overall, making the last driver was Andy.

Andy, then, succeeded to maintain the position and passed the checker flag on the 5th position over all at 4:00PM on April 26.

In this race, all the drivers as well as mechanics took FPP (Immun' Âge) under the instruction of the Aston Martin Racing Health Advisor. They all completed their mission without losing concentration regardless of their age.

The female professional driver Alice Powell has been supported by ORI scholarship since she was a high school girl and became the first female to win a Formula Renault championship. This is her first 24-hour endurance race, but she did a very fine job, giving advices to her teammates to relax themselves. It was a wonderful stage for her to be able to show her talent to so many people.

With a pride, we may say that three amateur drivers including Andy, and Vantage GT4 showed such a great performance!