We obtained interesting results from the experiments on
Radio-protective effect of Fermented Papaya Preparation
(FPP), and the following is a special preview.

The experiments suggest a significant protective effect of FPP on cell survival/proliferation of human foreskin fibroblasts when added immediately after different doses of irradiation (Fig.). 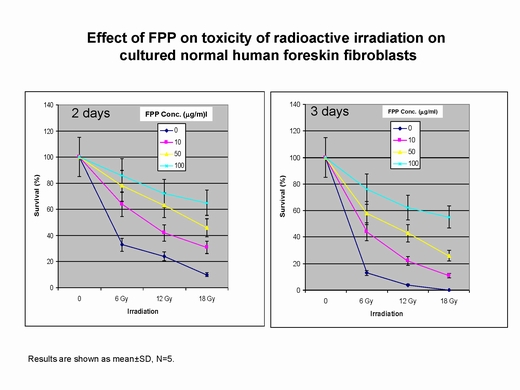 Human foreskin fibroblasts were seeded in well plates, and after overnight incubation, the cells attached, and the plates were irradiated by a Gammacell® 220 (MDS Nordion,Excel, Canada) at 4 doses: 0, 6, 12 and 18 Gy. After irradiation, FPP, at concentrations of 10, 50 or 100 µg/ml, was added to each well, and the cells were incubated for 2 or 3 days. Cell survival was estimated by CellTiter 96® Aqueous Non-Radioactive Cell Proliferation assay for cell vitality. As shown in (Fig.), it showed a sharp decline in the cell vitality with the radiation dose, but FPP could reduce the loss of cell vitality in accordance with the concentrations.

It suggests that FPP can repair cellular damage after irradiation.

Additional experiments in vivo and/or in vitro are planned in order to investigate the specific mechanism(s) by which FPP protects the cells from irradiation damage, and in addition to survival / proliferation, cells will be assayed for apoptosis, DNA changes and mutations.

DNA damage and mutagenesis are important because indicate the carcinogenic effect of irradiation.