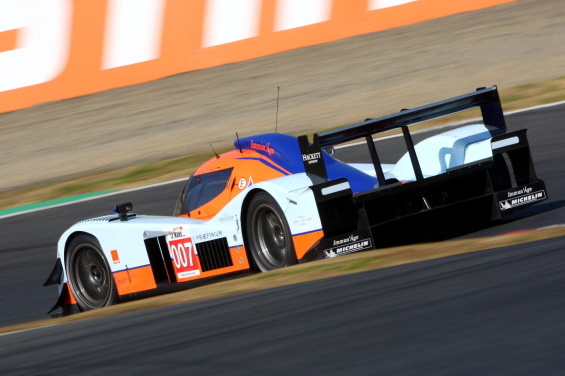 The ACO( Automobile Club de L'Ouest ) is a traditional automobile club, which has been continuing its development for nearly 90 years since they started organizing the Le Mans 24 Hours in 1923. They organized the American Le Mans Series in 1999, the European Le Mans Series in 2004, then at last the first Asian Le Mans Series was held in 2009. The first event took place on the Okayama circuit between October 30 and November 1.
The Okayama circuit is totally different from a high-speed circuit like the Sarthe circuit in France. The course requires lots of techniques with hard corners and the setting of the cars were tough for the teams and drivers.
The race was split up into two 3-hour events. The 2009 Le Mans Series Champion, the 007 car of Aston Martin also took part in this first race in Japan. The audience was fascinated by its beautiful body and the sensual exhaust sound.

In the first race, the 007 car of Aston Martin was leading the race until 10 minutes remained when the team stopped for repairs following the official rule. We got all disappointed with the result of the 4th place in the end. I wonder if it was a trial for the champion since this rule was not applied across the board.
In the second race, the pit was in a solemn and serene atmosphere from the morning and the team started the race calmly but with fighting spirit to win. The 007 speeded up as the race went and the Aston Martin Racing claimed a sensational victory. After the driver Stefan Mücke took the chequered flag, he kissed the 007 with his gratitude and the season of the year came to an end for Aston Martin Racing.