OSATO Immun'Âge, 4 Victories in 5 races!!!
~They already win the challenge!?~

In the Aston Martin GT4 CHALLENGE at DONINGTON PARK on 29 July 2012,

OSATO Immun'Age of Dr.Pierre Mantello (Director of Osato Research Institute) and
Olivier won the race starting from the last position on the grid due to the mechanical trouble
in the qualification. 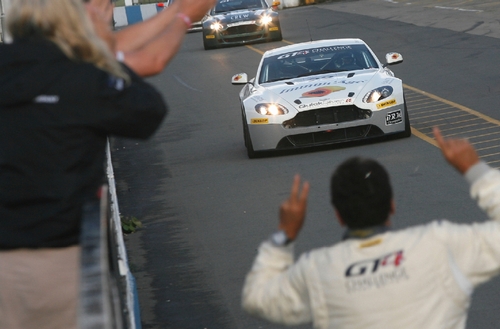 The moment the car crossed the finish line, Pierre showed his joy of victory giving the piece sign!

Also, at the BRANDS HATCH on 14 July 2012, they crossed the finish line in the first place.

However, they ended up in the second place being penalized for the slip during the race,
which made them lose a victory for the first time this year.