Summer is over, and in autumnal sunshine the opening ceremony of the renovated Curie Museum was held in Paris on September 13, 2012. It is located in the Curie Institute in the Latin Quartier of the 5th arrondissement of Paris, which is in the hospital of the Pierre-and Marie University, known as "Paris VI", covering radiotherapy researches for cancer treatments. The laboratory of Marie Curie is reserved as it was when she was alive and it has been open to public as a part of the museum. She is famous for her pioneering research on radioactivity including the discovery of two elements, polonium and radium. She is the one who laid the groundwork for the current radiotherapy.
Madame Curie won the Nobel Prize twice, first in physics in 1903 (the award was shared with her husband, Pierre Curie, and Henri Becquerel) and again in chemistry in 1911. She became the first female professor at the University of Paris and opened the door for female scientists more than 100 years ago. She was a wonderful mother as well. She was married to Pierre and had two daughters, Irène and Ève. She was good at housework such as cooking and needlework. She was like a modern ideal female in the sense of balancing her career and child-raising with the help of her father in law.
Her elder daughter Irène supported her research with her husband and they were jointly awarded the Nobel Prize in Chemistry in 1935 for their discovery of artificial radioactivity, which was the 5th Nobel Prize in the Curie Family. Her younger daughter Ève learned Piano, not Physics or Science and took good care of her mother in her private life. She nursed her mother with devotion until her death. Her husband Labouisse was the executive director of UNICEF and collected the Noble Prize for peace in 1965 on behalf of UNICEF. The life of Ève seemed to be most closely connected to Nobel Prize laureates. 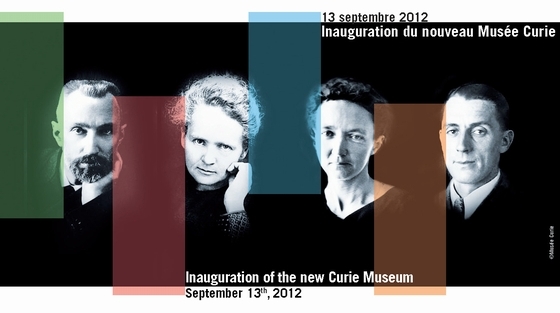 The renovation of the museum was made by the legacy of Ève Curie according to her will, who died in her sleep on 22 October 2007, aged 102. It is said that she felt enormous guilt that she alone among the women in her family had escaped a life of radiation and its consequences of living long. She must have wanted to show more people the achievement of her parents and her elder sister and her husband by this renovation of the museum.
The Osato Research Institute have been dedicated to support a project of preserving historical resources about Madame Curie and her two daughters' visit to USA during the year of 1921 in order to show them visitors of the Curie Museum in Paris.
The Osato Research Institute also helped the large screen display to get installed in the center of the museum under the large photo panel of Mr. and Mrs. Curie, her daughter Irène and her husband Frédéric Joliot-Curie so that visitors can see many photos and get information on the achievement of Madame Marie Curie and her family members, including the five Nobel Prizes awarded to them, by use of a touch panel screen like iPad. Mr. Hayashi, president of the Osato Research Insitute, and his wife were invited to the ceremony held on September 13, 2012 to celebrate the renovation of the museum and got honored to receive special thanks by Prof. Claude Huriet, director of the Curie Institute, and two grandchildren of Madame Curie, Hélène Langevin-Joliot (female nuclear physicist) and Pierre Joliot (biophysicist) who attended the ceremony. 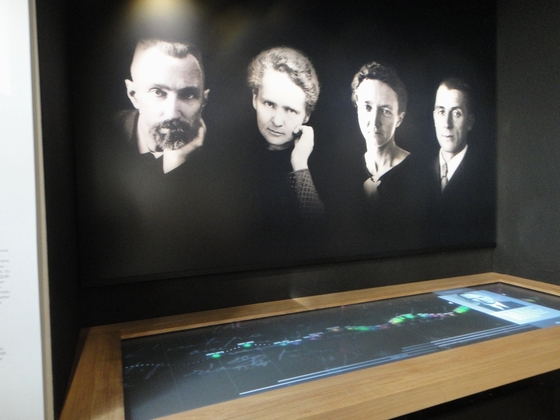 Welcoming large photo panel of Mr. and Mrs. Curie, her daughter Irène and her husband 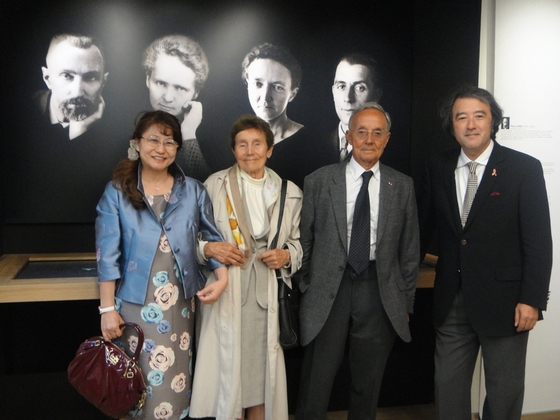 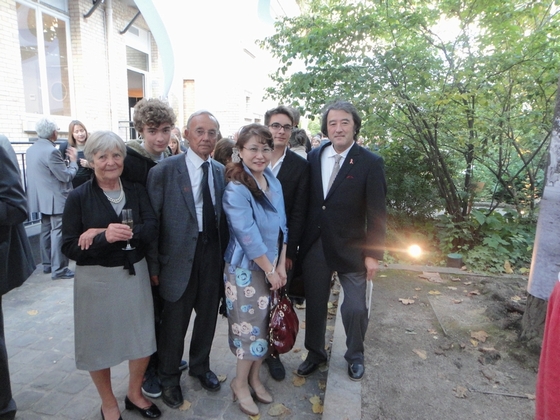 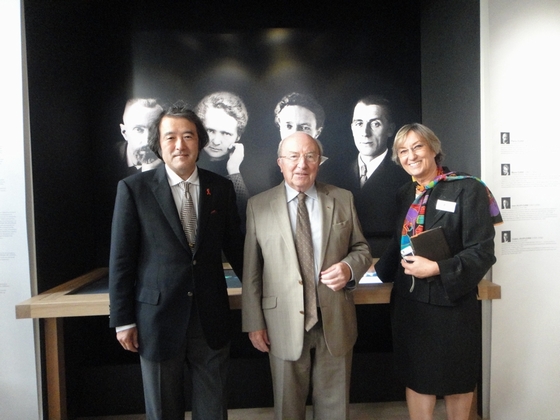 With Prof. Claude HURIET, director of the Curie Museum, and Hélène All looking happy with the new Curie Museum 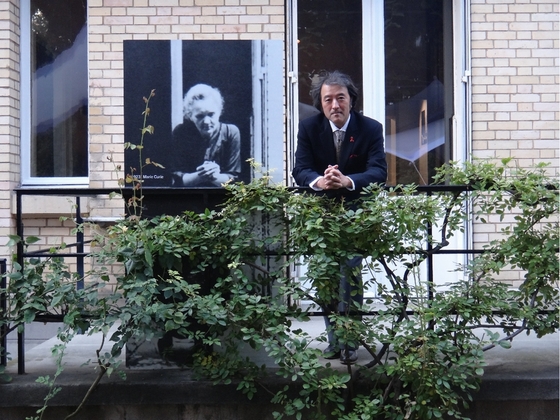 Capturing the moment of Mrs. Curie standing in front of her own ｌaboratory
Feeling as if she was sending a message to us that science exists for people. 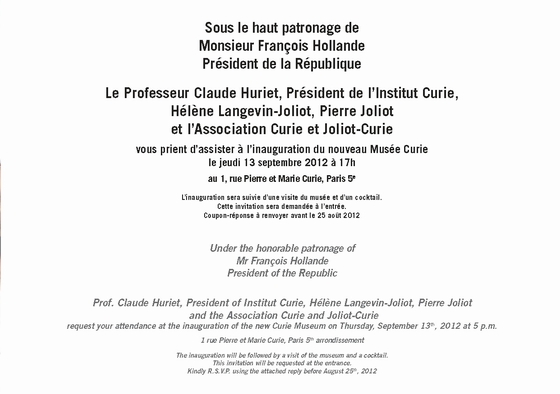 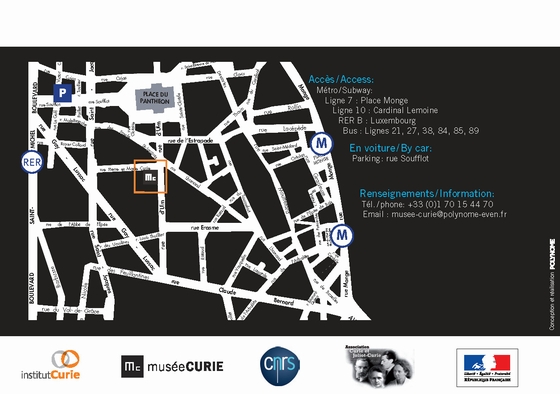