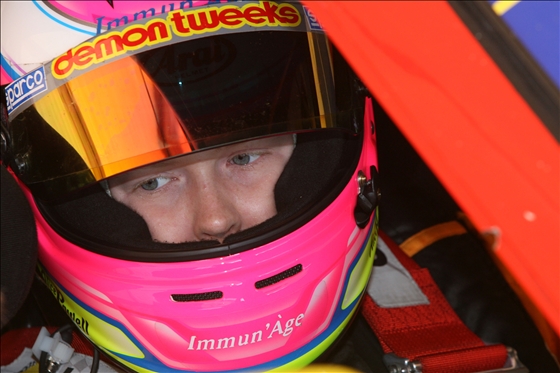 The Osato Research Institute has been supporting a young racing driver, Alice Powell, with scholarships.
Please enjoy the latest race reports from Alice.

2010, September 11,12
Formula Renault BARC in Rockingham The penultimate round
She managed to qualify 5th and 4th for the races.
Race One, She got off to a good start and managed to get into 4th place.
Race Two, She did not get off to the best of starts, and fell down to 16th place, but she backed up to 7th in the 14 lap race.
She is still second in the championship, 14 points behind the leader on dropped rounds. The last round is at Thruxton on the 17th of October.

2010, August 8
Ginetta G50 in Snetterton
Race One, She got a great start up to 7th, but then was hit from behind and dropped down to 10th.
Race Two, She started 10th, and again got a good start up to 7th, the race track was wet. After overtaking someone, going into the next corner, he must have locked up, and went straight into the left rear of her car sending her off on the grass, and the front dug into the ground very badly, due to the grass being very bumpy. This meant, the radiator was full of grass, and sadly blew up the engine!!!
The team did a brilliant job to get a new engine in the car overnight.
So for race three she started 10th and managed to fight her way up to 7th, until someone behind her made a mistake, went across the grass, and straight into the pack of cars, hitting her. This damaged the steering which meant she could not continue the race. However, a positive to take out of the race, was that she posted the 3rd fastest lap time and did not even complete the full race.

2010, August 2
2010 Formula Renault BARC Round 7+8
She managed to climb from that position up to 2nd for race one, but race two, her car had problems with the clutch. She slipped to 6th, but managed to fight up to 4th. She still had very good pace. She is still in the championship, 18 points behind on dropped rounds.