Iron-overload is a major clinical problem in various diseases. Under this condition, serum iron which surpasses the binding capacity of transferrin is present as non-transferrin bound iron (NTBI) and cellular unbound Labile Iron Pool (LIP) is increased. LIP participates in generation of free radicals, including reactive oxygen species (ROS).

Increased ROS, with concomitant decrease in anti-oxidants, results in oxidative stress and toxicity to the liver, heart and other tissues, causing serious morbidity and eventually mortality. Therapeutic iron chelation reduces the LIP and thereby ameliorates oxidative stress-mediated toxicity. Many food-derived antioxidants have the capacities to scavenge ROS and chelate iron.

We have reported that fermented papaya preparation (FPP) has ROS scavenging effect on blood cells in vitro or in vivo (in thalassemic patients and experimental animals).

We now investigated FPP's iron chelating effect - its ability to prevent (and revert) LIP accumulation. Liver- and heart-derived cells, and RBCs were exposed to NTBI in the form of ferrous ammonium sulfate and the effect of FPP on their LIP content and ROS generation was measured by flow-cytometry. 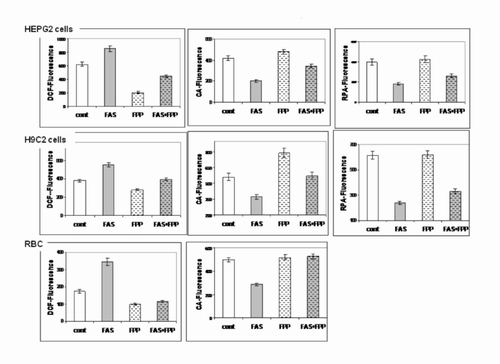 The results indicated that FPP reduces LIP and ROS, and suggest that its antioxidant mechanism is related, at least in part, to iron chelation.