In β-hemoglobinopathies, such as β-thalassemia (thal) and sickle cell anemia, the primary defects are mutations in the β-globin gene. However, many aspects of the pathophysiology are mediated by oxidative stress. Fermented papaya preparation (FPP), a natural health food product obtained by biofermentation of carica papaya, has been shown to limit oxidative stress both in vitro and in vivo. We studied the effect of FPP on two groups of β-thal patients: β-thal, major and intermedia, (in Israel) and E-β-thal (in Singapore). The results indicated that in both groups FPP treatment increased the content of reduced glutathione (GSH) in red blood cells (RBC), and decreased their reactive oxygen species (ROS) generation, membrane lipid peroxidation, and externalization of phosphatidylserine (PS), indicating amelioration of their oxidative status, without a significant change in the hematological parameters. Since the turnover of the erythron is relatively slow, it is possible that longer duration of treatment, probably with the addition of an iron chelator, is required in order to achieve the latter goals. 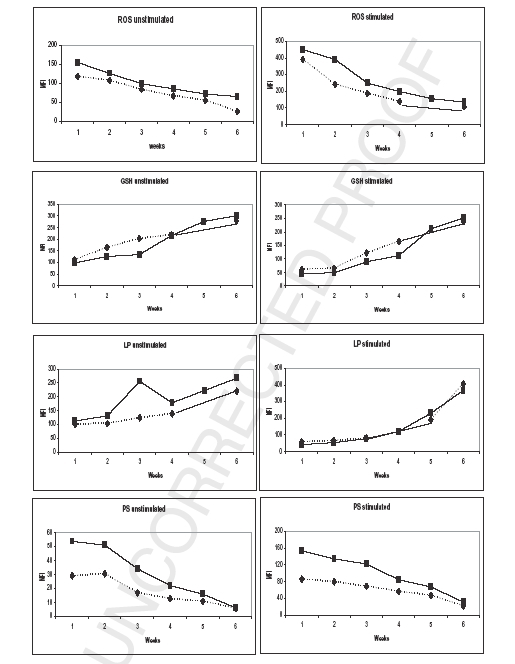 Changes in parameters of oxidative stress following administration of FPP to patients with β-thalassemia (■) and E-β thalassemia (◆). The data present the Mean Fluorescence Index (MFI) of cells stained for reactive oxygen species (ROS), reduced glutathione (GSH), lipid peroxidation (LP) and external phosphatidylserine (PS) in H2O2-stimulated (right) and unstimulated (left) samples. Note that ROS, GSH and PS for cells stained for LP, the MFI is reversely proportional to their LP. The results show a decrease in ROS, LP and externalization PS concomitant with an increase in GSH.